Allow me to take you all just a bit further down my mental rabbit hole by combining my unfinished posts from January into one. Hopefully someday I’ll come back and finish these, but for now you get what you get and you don’t get upset…..

It’s been almost two hours since I’ve had a hit. I’ve gotta get my fix, I can’t sleep without it. Please. Please somebody look at my blog. Give me a like, follow, and comment. Hell, who am I kidding, I’ll take any one of the three. Just please someone give it to me. Oh, a notification! What’s this?

The taste of human flesh is… Well… How do I put this? Have you ever had meat that was described as “gamey”? You know, kinda salty, kinda something else. I guess that’s the best way to put it, human tastes gamey. Thinking about it now, the saying “most dangerous game” holds true on so many more levels than at first it would appear. I mean, obviously humans are harder to hunt. They fight back, and in most cases end up hunting you once they get their wits about them. This is why I put the add in the paper that you saw. I’m done. I’ve been through this too many times. Too many broken bones, bruised flesh, and bloody rags. I can’t chase after you guys like I used to, so I have to rely on volunteers. Paid volunteers, don’t worry, I have already transferred the money into your wife’s account. But, you see, now that the physical part of “The Game” has been taken away from me, I have to find other ways to get that same high. I promise to try to make you as comfortable as possible during this process. But let’s be honest here, you signed your life away. And with it, you also signed your last 12 hours or so of life away, to me. I’ll make a deal with you. I’ll keep you alive for as long as this plane ride lasts. We can go anywhere that you’d like. I mean the least I can do is state, province, or country in which I belly your remains.

I’m not sure what happened, but over the past couple of hours my Instagram has BLOWN UP… Not in a good way. I think I’ve counted 30-something new followers, all fake accounts. What did I do? Did I like the wrong picture somewhere? I’m not really all that worried about. I’ve had fake followers before, they usually only last a day or so. But never like this. It really makes me wonder what triggered this whole thing.

P.S. This has nothing to do with you guys, please feel free to connect with me on Instagram.

Let’s be honest, people talk about their sexual conquests. I’m not normally one to kiss and tell, but c’mon. I guess I should say that I’m not one to kiss and tell when it comes to my new experiences. But the old stuff? When I’m talking to someone who has very little to no chance of ever meeting the woman that I’m referring to? Yup, that’s fair game. One thing though. I don’t share pictures. And it’s weird to me how disappointed some guys have gotten at the fact that I don’t.

First off, in the case of a girl that I am seeing. Hell no you can’t see that. I’m selfish, and it’s incredibly disrespectful. Why would I want you to know what my girl looks like naked? I really don’t get it. I don’t need your confirmation, I know how she looks. I admit, at times I’ll request that my girl show some cleavage when we go out, hypocritical, I know. I just like the idea of showing off my normally more conservatively dressed woman. Again, hypocritical, I know. But it’s cleavage

Remember when you were younger, and as you lay in bed after a busy day you could feel the adrenaline coursing through your body? It was like your body was moving, recreating your movements from earlier. I imagine that is the phantom limb feeling that amputees sometimes have. That feeling. That… Feeling… I remember it was just that, a feeling. This on the other hand, was much much more.

So, I ran my first marathon last week. Now, because it was my first, I didn’t exactly know what to expect and oddly enough I thought that this was completely normal. I ran, showered, ate, slept, just as I did with every other race. Just as I did with every training run… And then I woke up, partially. I had that post-busy day adrenaline feeling. Didn’t even bother to open my eyes. It felt amazing. I could almost hear the cheers, feel the wind, even my breathing changed. So surreal, so very… Real! Ouch! I just stepped in glass

Her lips, glued to mine.

Cheek to cheek, chest to chest,

belly to belly, her body is the best.

Knuckle for knuckle, our hands are a perfect match.

I’m not sure what’s going on here, but I got my anniversary notification after my anniversary, and I just got my 200 follower notification after I went over 200 followers. Is WordPress messing with me? I already went ahead and made a Bloggiversary post so I’m not going to rehash that feat in this post. I’m also not going to go back and change the picture there, so I’ll add it here. Now, as far as the followers….. Thank you!

Until next time, tell your friends! 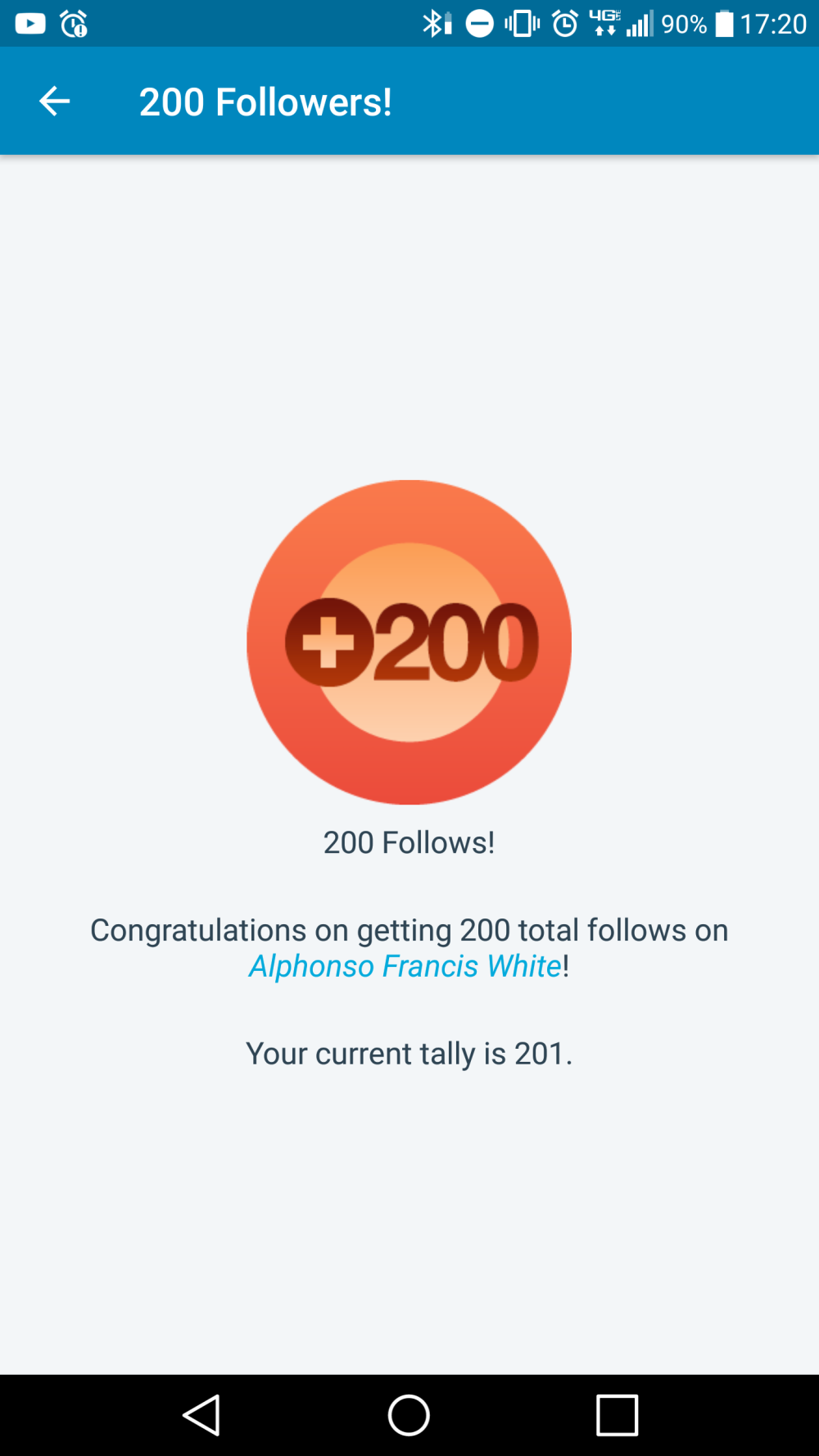 P.S. I’m also working on changing my Instagram around a bit, I’m still not sure exactly what I would like to do with it. But yea, here it is, Happy 200, um, after your 200th?