Ah screw it, let’s get specific about some stuff here…. In no particular order,

Yup, this will in fact backfire. You will end up holding the door for a long line of slow and/or ignorant people. Just smile and nod, trust me. Yes, there are women out there that do not like this, but until she tells you that she doesn’t just go ahead and assume that she does. On the flip side, I’ve honestly never liked it when a girl has reached over and opened my door from the inside, I feel like it takes away from my initial gesture, it kind of turns it into us doing something nice for each other instead of me doing something nice for her (I’m selfish, sue me). I believe that I am the exception on this one ladies, but the “rule” is once the guy opens the car door for you you lean over and crack open his door for him on from the inside.

2 – Pay for the date (women, you should offer to pay your share… And a gentleman should turn you down), the ENTIRE date.

No matter how bad the date is, you should accept this possible loss before you even ask her out. If you are broke, do something for free (Google it!), I’m serious. Use your schedule as your excuse to shorten the date to a quick (and free) museum tour or even just a nice walk. Accept her offer to pay after multiple dates when you find yourself leaving the date wondering when you will go out again not if you will go out again. When I get to this point, I usually just let them pick up the tip… And EVERY single time I have done that the very next conversation has always started off with her asking (sometimes demanding) to take me out for a change.

3 – Walk on the outside of the street.

4 – There are only two scenarios (maybe three) that I can think of where it is acceptable for you to put hands on a woman.

The first, is in church. Lay hands on her, get back Satan! The second, is in the bedroom. Pain can at times bring pleasure, just make sure that she is consensually experiencing more pleasure than pain. The third, I shudder to say. If you are stupid enough to ever find yourself in a situation in which she is threatening you with some sort of weapon (or is just much bigger and stronger than you), you are in legitimate fear for your life, AND (not “or”) you are otherwise physically unable to escape… I guess this will count as the one and only circumstance in which it is acceptable to….. Die. You idiot. Don’t hit women. You idiot. Ever. You idiot. Not even if there is a fire. You idiot…. I actually have hit a one, once. When I was little (7-ish) I got into an argument with my cousin. I hit her, she pushed me down the steps, I cried to my dad, and he said “that’s why boys don’t hit girls”. I learned this lesson after doing it just one time as a kid  by being pushed down a flight of stairs, now just imagine how Karma is going to repay your adult ass. You idiot! *Woosah*… *Goozfrabba*… OK, I’m back.

Do not allow anyone to treat your woman worse than you do (wow, that sounded pretty bad). What I mean is that you should treat her with respect, a higher level of respect, and you should demand that others do the same. Unless I am transporting someone who is elderly, ill, or injured, my woman rides in the front seat. Don’t talk down to her, and don’t allow others to talk down to her. I have never, not once, called a woman (that I was with) out her name (outside of the bedroom *Grr*). I guess “call out her name” isn’t as widely recognized as I thought. I’m not really sure if that’s a good or a bad thing. Anyway, you can Urban Dictionary (the other “Google”) that one I guess. Show her that you care. All of those things that she wants and you are willing to give to her, give her, consistently.

Basically, being a gentleman is easy. Figure out what she wants. Decide if you are willing to give it to her (giggity giggity goo). If you are, do. If not, leave.The End. 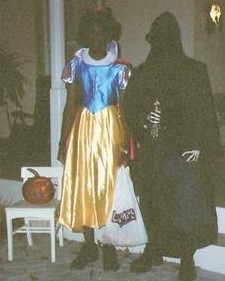 P.S. About this picture… Um… Well… You see… You know what? I don’t have to explain myself to you! Like your prom dress was any better! Oh, I mean Halloween. Yea, this was definitely Halloween. Not prom.